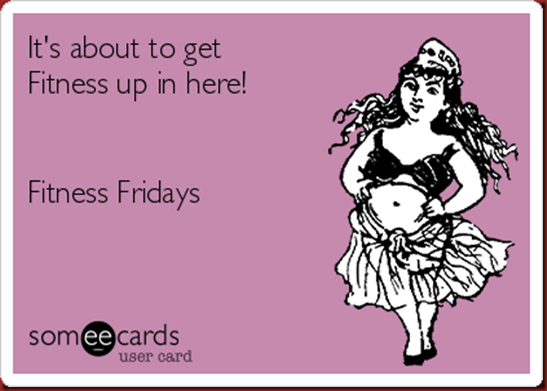 In an effort to put more of myself out there in the world and to encourage more honesty in blogging and in body image I am posting my first Fit Friday blog.

For this foray into this I wanted to be honest about my fitness level. Which is 0… or -5.

Growing up nobody I knew EVER exercised. Every once in a while my Uncle would have small bursts of crazy strict regimines but they never lasted long, usually a summer. I remember one summer when we lived about 5 miles apart that he just showed up at our house one day and he had rode his bike the whole way, and we are talking out in the country where the roads are NOT flat. I remember being really impressed. We had a pool at our house when I was in Jr High and High School and I would swim out there all the time. I never thought about fitness or the fact that swimming was exercise- I was just having fun.

Jr High was when I first heard about diets. Anorexia, bulimia, water and crackers only. . . None of the girls I was friends with ever mentioned exercise only diets. I was on the chubby side back then but I never really got teased for it, luckily (especially considering the superficial school setting we were in).

Sophomore year of High School- I joined the marching band. Which is a lot more work than I think anybody not in it realizes. It's marching, in a very specific way (i.e. moving your muscles in abnormal ways) over and over and over, in the heat (sweat) and holding your instrument in a static position. But again, I didn't see it as work or even exercise. I just saw it as fun. Can we also note the ridiculous amount of energy you have at this age? Especially considering I was having skittles and a Dr Pepper for lunch, and that was it!

At the end of the year my friend Jacklyn convinced me that I should join the Flag line the next year and taught me the basics so I could try out. Swinging a 5.5' fiberglass pole with a yard of polyester on the end took more strength than I thought. But again... again... it wasn't exercise - it was fun!

Junior Year - I made the flag team and between the flag camp the summer before and the routines we did that fall for halftime my arms became buff. At this point I realize a little more that I am bigger than most of my friends and actually most of my school. I started eating real lunches served in the cafeteria with all my new group of band geek friends. No more sugar for lunch.

Senior Year - Between another year of flag and then the work I was doing with the theatre department I was always on the go. Even outside of class and rehearsals I was doing things with my friends. This was also the year that I realized that looks were very important at my school, not so much with my friends, but I did notice weird looks when I'd only wear marching band tshirts for a week straight (I still to this day have a whole tub of them).

freshman year of college - much more rigorous marching band, three square meals a day, 30 minutes a day/ 3 days a week at the gym with Amb because she had to for her class. We would go and watch Newlyweds on the TVs above the elliptical. Some of my friends got more into fitness, but these were guys trying to actually gain weight in muscle. Ever heard of the Freshman 15? That didn't happen to me or my bestie/roomie, we both lost 20 lbs. Oh to be 18 again.

Then I transferred to a school with no marching band... I joined in the theatre group more but sitting at a sewing machine or even building flats for sets is nothing compared to marching band practice. I gained a bit of weight. Add on that I had moved home and was now eating without really paying for it, I ate a lot more food than I should have, and bad food.

Then I started Birth Control. . . Oh how I hate it. Side effects include weight gain. Nothing noticeable at first... then over one year I had gained 20 lbs. Then another 20 the next year, and another 20 the next. This is where my downward spiral in to hating my body came in. I tried limiting my food, I tried cutting out sodas (mainly because I couldn't afford them anymore either). I bought home fitness DVDs which I could barely make through the warm-up without feeling like I was going to pass out. I transferred schools again and joined the marching band there, marching band has always kept me sane. But not at this school. It was torture every single day, and not because of the physical aspect but the mental. I wasn't a little freshie looking to impress everyone. I had upper level classes, a job, bills, and had just been dumped. I needed friends and what I got were enemies. I didn't lose any weight that semester; I did notice an increase in the tone of my arms. But it did nothing to help my overall weight.

After graduating and getting a job where I was up moving around all day I did lose a bit, like only 10 lbs a bit. Then I got a much better job that was more suited to my degree, which landed me sitting in a chair in front of a computer 8 hours a day. Then I went home and spent another 4-6 in front of the computer or watching TV. I still didn't do anything; I had no money for a gym or even good shoes. I was lost as to where to start.

Today. I am at my biggest and most unhealthy. I weigh 235 pounds. I am 5'-6" tall. I lead a 95% sedentary lifestyle. I have chronic back pain, no strength to move or open things, no stamina, no energy, and very little self-esteem. I have doubled the number of stretch marks on my hips in the last year alone. I barely fit into my wedding dress. I am addicted to sugar, and not in the joking way, in the all I can think about are cookies or a milkshake all afternoon and can literally get nothing done because it feels like my brain is screaming at me.

When I started my Pinterest addiction one of the first boards I made was Fitspiration. I pinned nutritional facts on all the bad stuff. Beginner workout routines. Couch to 5k. Inspirational photos and quotes. The one big thing that I've come across (from a friend of a friend who is a nutritionist) is a pin that says "Food can either be the most powerful medicine or the slowest form of poison."

I know I don't eat the right things.

I know I make bad decisions.

I know I need to get up and move.

I know that doing so will help my life become more satisfying, help my sex life, give me energy to do more things, and make my body better equipped to handle when I become pregnant.

yet... here I am... barely fitting into my size 18 shorts I bought for the honeymoon.

I have no self discipline. Nobody to keep me motivated but  myself. No body will do this for me. I'm truly afraid of trying and failing. But I have realized I am more afraid of not trying and dying.

Something has to change, and that something is me.

So on friday's I will post, as a way of accountability. I hope you enjoy the brutal truth of what it will be like going from a couch rock (potatoes are too nice of a word) to a healthy (healthier) individual.

Goals for this week:

2. Go to zumba with mom on Thursday and Saturday.

PS. Honesty moment: I uploaded this and put the finishing touches on it while drinking Sweet Tea and eating chips. I have a long way to go.